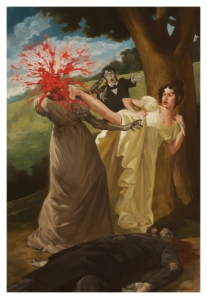 Alex Reid’s input to the question of speculative realist lit crit sparked an idea that isn’t new to me (or probably anyone) that I thought I’d throw it up here anyway.

When I was training in creative writing (poetry, MFA, Old Dominion U), my thesis director was fond of saying “You’re not going to tell me anything I don’t already know. You are not wise.” I took this to mean (and still do) that the writer has no special insight into the animal, vegetable, or mineral condition. What the creative (and, I suppose, any successful) writer hopes to do is create an occasion. The project is to create a thing (we actually called poems things then) that had shape, built ethos through techne, was superficially appealing, while at the same time allowed for uses the writer had never considered, maybe even could never consider. After poetry readings, for instance, folks might come up to me and say “I really liked the poem about….” and I would only know which one they meant from the nouns they used that I recognized from the poem.

Leaving aside the question of whether my own poems were literature (I had some successes), I’m thinking about lit in terms of potential and hacking per my last few posts. Using the tricks of the trade, as it were, poets build in potential exploits via word choices and combinations, sure, but also in line breaks (enjambed or not), in white space, diction, meter, all that. Far from trying to plan for every contingency, the job of the poet is to multiply potential occasions (dunamis), to make a thing that is useful beyond whatever was derived from its composing. So whereas I agree that there’s no truth to discover (no innate wisdom wrapped in a container) in literary or other writing, that it’s about composing knowledge, I do think that one’s encounter with these potential exploits as an occasion (a contingent encounter between two or more things) may feel like discovery. (And this is maybe what’s meant by authenticity?)

One of the things Pride & Prejudice & Zombies from a few years back demonstrated (and rhetoric is a kind of demonstration) is that the Austen book could have always had zombies in it. It just took Grahame-Smith to discover that for us.

To my mind, the above may not be all that OOO, since it’s less about keeping things flat and separate and more about encounters, potential, exploitation, etc. And none of this is new. It’s what Scott meant when he kept telling me I’m not wise.