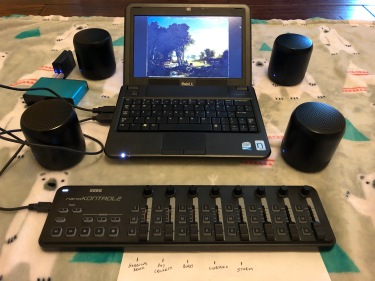 I’ve been making a thing. I’m calling it a Time & Place Machine, and it’s probably useless. One goal was to use old equipment I already had. Another was to make something with sound. So I gathered a decade old Atom-powered netbook, a couple of wireless Bluetooth speakers, a midi interface, a cheap external sound card, a Bluetooth transmitter, and an older 32-bit Ubuntu Linux distro (I hadn’t touched Linux since Ubuntu was in the mid-single-digits and I’ve never been good with command line, so there was some learning involved). I played around with quadraphonic routing in Jack and settled on Sooperlooper for loops (both new to me), and realized that I needed one more transmitter and another pair of speakers (so I was unsuccessful using only old stuff I had). Then the youngest and I went to a record store, where she helped me pick out a sound effects record from the 1960s to use in some way. I ripped the album to digital, separated out the tracks, shortened some that seemed to go together for loops, then routed them around so that anyone (you don’t have to know anything) can sit among the four speakers and mix a variously mix the sounds of a Sound Spectacular 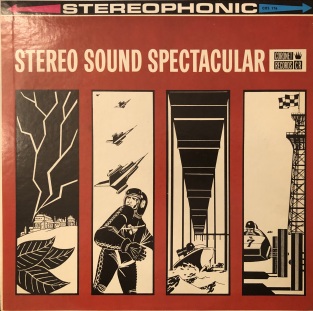 place that never really existed that is also definitely a place from the past (album crackles mean the past). As an excuse for there being a screen, I threw up Asher Brown Durand’s “The Babbling Brook” (1851) just because it represented most of the sounds and was also a representation of a place from the past (but any or no image would’ve been fine, too). It’s pretty fun and easy to play with (I’m told by a few folks). Next, I’m going to make my own focused field recordings of mundane places around campus so that anyone with a Time & Place Machine can go sit on a bench anytime they want to.

I might also make a new iteration that’s less portable but more powerful from an old Atom-powered 64-bit nettop mounted to the back of a low-res lcd (a monitor is necessary right now because I have to redo the routing every time I boot up the machine; there’s probably a way around that; probably a command-line way).